Illicit drug use is a serious problem which causes personal and financial harm to the residents and communities throughout Kenton County.  Drug trafficking, drug-motivated crimes, and overdose deaths affect the quality of life for all residents, not just the end users themselves.  For this reason, the Kenton County Police Department (KCPD) partners with the Northern Kentucky Drug Strike Force (NKDSF) and with the Drug Enforcement Agency (DEA). 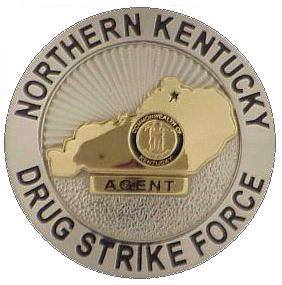 The NKDSF is a task force supplemented by officers from agencies throughout Northern Kentucky. The NKDSF is responsible for investigating, apprehending, and prosecuting those involved in the illicit use and distribution of controlled substances. KCPD provides two officers to the NKDSF on a full time basis.

KCPD also provides an officer to the DEA on a full time basis.  This officer is granted federal law enforcement powers and works with our Federal partners to help bridge the gap between our local drug traffickers and those who bring in the drugs from outside the region.  Our DEA Task Force Officer can also federally prosecute local drug traffickers who meet Federal Guidelines for prosecution.  The NKDSF and DEA work closely together to try and stem the tide of illicit drugs entering our region.

If you have information on illicit drug use, tips can be sent via email or by contacting the NKDSF at 859-525-6272.